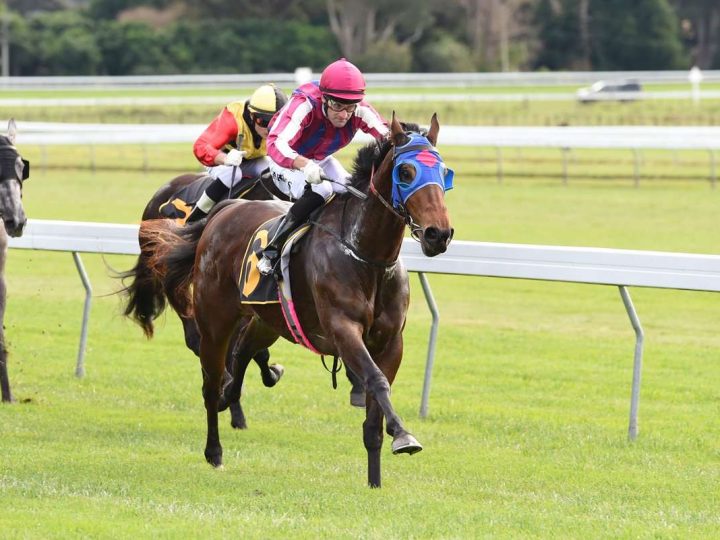 Veuve Clicquo
2000 Guineas (Gr. 1, 1600m) winner Rock ‘n’ Pop (Fastnet Rock) sired his first two-year-old winner on Friday at Otaki.
The aptly named Veuve Clicquot (ex. Megan’s Tough Love) won over 1200 metres, in the hands of Johnathan Parkes, for owners and trainer Tony & Judith Bambry.
Winning the $10,000 NZB Insurance Pearl Series 1200 metres, Veuve Clicquot also collected a Pearl Series Bonus of $8,000 after being purchased by the owners for $12,000 at the 2016 New Zealand Bloodstock Select Yearling Sale, from the Mapperley Stud draft.
“It was great to see him get a win with his first crop two-year-olds, very exciting, and she looks a filly with a good deal of strength and promise,” said Te Akau principal David Ellis.
Syndicated by Ellis, Rock ‘n’ Pop was a magnificent yearling that made $1 million at the 2010 New Zealand Bloodstock Premier Sale. He received his early education and trialled in the North from the Te Akau stables in Matamata, before transferring with the Guineas in mind to their southern stables at Rangiora.
Neill Ridley ran the stable and was quite impressed by Rock ‘n’ Pop from the outset: “He’s been a pleasure to work with, a nice horse to ride, and got a good brain on him,” he said.
The ease of victory by Rock ‘n’ Pop in the 2000 Guineas, seldom seen in racing at the ultimate level, stamped him as a racehorse and confirmed the richness of his pedigree.
Following the win, Ellis said: “He cost one-million dollars as a yearling, but being a Group One winning son of Fastnet Rock out of a Sir Tristram Derby winning mare he’s worth three or four times that amount now as a stallion”.
Rock ‘n’ Pop is from the 1993 New Zealand Derby (Gr. 1, 2400m) winner Popsy (Sir Tristram), who won the Derby at just her fifth start. Named NZ Filly of the Year, Popsy registered her second Group One win in the Championship Stakes (2100m) for three-year-old fillies. She also won the Queen Elizabeth Handicap (Gr. 2, 2400m), those three races all at Ellerslie, and Counties Cup (Gr. 2, 2100m), with her six wins from eighteen starts earning $351,750 in prize money.
Commencing stallion duties in 2013 at Waikato Stud, Rock ‘n’ Pop yearlings have sold up to $160,000 and his service for 2017 is $9,000 + GST with a live foal guarantee.
Ellis said that Te Akau trainers Stephen Autridge & Jamie Richards have some good first crop Rock ‘n’ Pop progeny to race this coming season as three-year-olds.
“He (Rock ‘n’ Pop) wasn’t a two-year-old type himself, and he’s from a really good Sir Tristram staying family, but he did win on debut as an early three-year-old in the spring and it doesn’t surprise me that he’s been able to sire a two-year-old winner from only a handful of runners so far,” he said.
“We have a number of really promising Rock ‘n’ Pop horses in the stable. A couple of impressive trial winner at two that we’ve taken along quietly, but you can see in them now the development they’re making between two and three is quite remarkable so we’re really looking forward to racing them next season.”
NB: At the time of service in 2007, Coolmore stallion Fastnet Rock (Danehill) stood for $45,000. His fee, now private (on application), has increased dramatically since then and thought to be in the vicinity of $200,000.