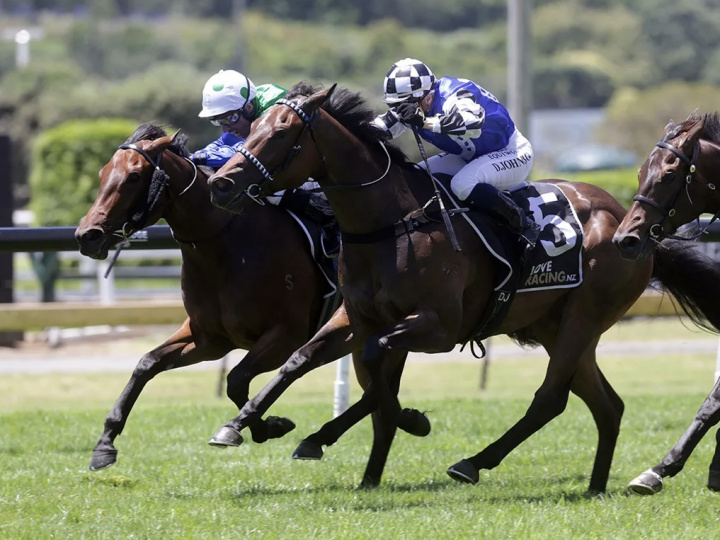 Wolverine lost her unbeaten record by the barest of margins in the G2 Eclipse S. at Ellerslie on Saturday afternoon, but was handed it back following an inquiry that reversed her nose defeat.

The Waikato Stud-bred daughter of resident sire Tivaci drove through in the straight two off the rail
under rider Danielle Johnson before they were carted wider on the track by initial winner Pacific
Dragon.

The outcome of the inquiry deemed Wolverine would have triumphed without interference and she
will now head to the Restricted Listed DoubleTree by Hilton Karaka Million with three victories from
three appearances and is a $3 favourite for the January 22 feature.

“I was pretty certain when we saw the replay that the decision would go our way,” trainer Roydon
Bergerson said.

“Danielle said the way she was finishing it probably cost her a length in the end as she was closing
very strongly.

“It’s great to have the decision go our way as today was an important race for her breeding career
further down the track, while it also gave her a really good look around Ellerslie before the Karaka
Million in three weeks.”

Following the youngster’s debut victory at Otaki, Australian Bloodstock purchased a 50 percent
holding and were quickly rewarded with her success in the G2 Wakefield Challenge S. at Te Rapa and now the Eclipse.

Wolverine is a daughter of the O’Reilly mare Knew It, who made a return visit to Tivaci this season,
and she is a grand daughter of Waikato Stud’s G1 Otaki Maori WFA S. winner Critic.

It is a successful family that includes the late O’Reilly, multiple Group 1 winner and resident Waikato
Stud stallion Ocean Park and the elite level winner and sire Grunt.